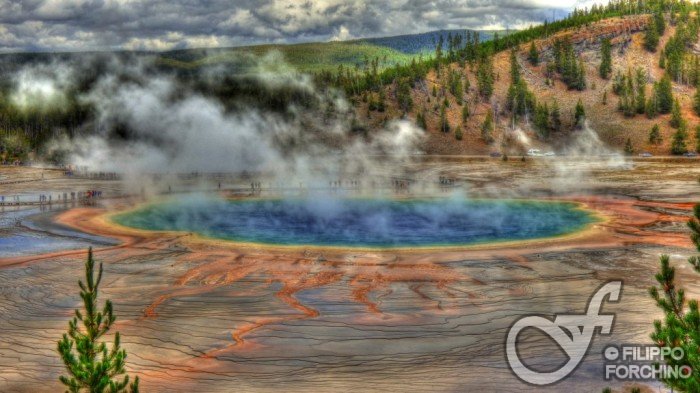 Wyoming, Idaho, Oregon and Washigton. The trip to the US Northwest has been a three weeks ride across the Rocky Mountains.

Grand Teton National Park has a sort of Alpine landscape, dominated by the Teon mountain range. The three peaks of Grand Teton (4199 mt.), Mount Owen and Middle Teton are always in sight. The surrounding plains are a wild scrubland where schools of bisons roam, and coyotes and foxes can be spotted occasionally. On the mountain forests, elks, deers and mooses are also quite easy to find. Lots of funny squirrels beat the visitor tracks looking for food. Wolves and bears also abund, but they are much more elusive. Unfortunately, we didn’t encounter any all throughout the trip, despite the warning signals.

The neighboring Yellowstone National Park, while sharing more or less the same kind of wildlife, is famous for its volcanism displays: geysers, hot springs, hot mud pots, acid pools… Yellowstone has them all. Actually, you’re wakling on the caldera of a huge ancient volcano. The prismatic colors of the hot water pools, given by different kind of bacteria living at different temperatures, are amazing; and so are the shapes of the concrections, as if you are in an open-air cave. And the might of the geysers, that can erupt for hours and then be silent for years.

After crossing an endless Idaho and its plains, where America’s most famous potatoes are grown, we reached our first destination in Oregon, the John Day Fossil Beds National Monument. It’s a kind of regional park organized in three distinct units, in the same area but miles away from each other. We were interested mainly in the so-called Painted Hills which, as the name says, are snady hills created by layers of sediments accumulated over the years, that took different colors according to the soil moisture level at the time of their formation. The hills have all sort of shades of yellows, golds, blacks, and reds, and are really a spectacular sight. This was enough to satiate our appetite for painted mountains, since the trip to Chinese Zhangye Danxia will still have to wait a bit. The Western style athmosphere of John Day and the sourroundings was also very pleasent. We need one more trip just to explore America’s wild west countryside!

Then it was time to drive to the sea and explore the Oregon Coast. Unfortunately we couldn’t detour down to Cape Perpetua and see the Thor’s Well, but we had enough time to see rugged beaches, moss-covered forests, charming beach towns and their cottages, huge sandy dunes and cliffs ending up in gigantic boulders scattered on the coastline. Many beaches are actually the result of the abrupt cooling down of a immense two headed lava stream, the output of an ancient eruption. The beaches are really full of tree logs dragged in by the tides, and along the cliffs it’s always interesting to investigate the tidal pools, you’ll never know what you can find there (crabs, jelly-fish, starfish, anemones, corals, seaweed, etc…).

The way north brought us to Astoria, (the set of the 80s movies “The Goonies” and still home to a sort of fan piligrinage. Ok… I was one of them!). Ecola State Park ended up being one of the best places where to observe the typical moss-covered forests (the correct name is Pluvial Temperate Forest). It’s really spectacular, like a sea of green that seems to swallow you. Then we drove East again, following the Columbia River, to the Columbia River Gorge National Scenic Area. It was of the first attempt in the USA to turn an area with a nice scenery into a tourist attraction. Gray concrete bridges over the waterfalls and the vintage steam-boat Columbia River cruise ships (gasoline-powered) are there to witness it. The area indeed is beautiful, it offers many forest hikes leading to several waterfalls and it is also where the famous Pacific Crest Trail passes, crossing the Columbia River via the huge Bridge of the Gods.

The next leg of this expedition was the tour of the Olympic National Park in Washington. The park has at least three distinct habitats (mountain peaks, rainforest and coast) and we tried to see them all. The alpine part allowed us to meet the famous and sassy mountain goats, in addition to other animals. We also had a chance to watch the stars with powerful telescopes by attending a free talk led by a local astronomer. The coast is wild and rewards with lonely wind-blown beaches. Much less people than in Oregon. A couple of days of rest in Seattle, and it was time to get back home… Already!

A trip quite far off the beaten track, except for Yellowstone that is perhaps the most visited US national park. I was eager to see Oregon forests and nature, and while I liked it, I think there are places around where I live that can really compete with its beauty, even if the scale of course is totally different. The same holds for alpine areas. Hiking Teton, it was really looking like hiking the Alps, even if I wasn’t able to recognize any of the peaks! What fascinated me the most – and I didn’t expect it – is the desert and the emptiness of the West: praires, cowboys, cattle and horse herds, scattered farms, ghost towns and villages distant each other tens of miles, connected by straight roads flanked by an endless row of poles carrying electricity or phone lines.

The slideshow order more or less follows the itinerary above, from Grand Teton to Olympic National Park. Some pictures are the result of the HDR technique to combine multiple expositions to enhance details.

Some of the most interesting animals spotted are portrayed here.